In the morning (or maybe during the night) I was thinking “where am I putting my time to?”. I know that everybody has the same time so when we come before our heavenly Father we won’t have excuses. The call of our Lord is still the same as 2000 years ago.

“After this the Lord appointed seventy-two others and sent them two by two ahead of him to every town and place where he was about to go. He told them, “The harvest is plentiful, but the workers are few. Ask the Lord of the harvest, therefore, to send out workers into his harvest field. Go! I am sending you out like lambs among wolves.”  -Luke 10:1-3

“When you enter a town and are welcomed, eat what is offered to you. Heal the sick who are there and tell them, ‘The kingdom of God has come near to you.’” (Luke 10:8-9) “Whoever listens to you listens to me; whoever rejects you rejects me; but whoever rejects me rejects him who sent me.”

The seventy-two returned with joy and said, “Lord, even the demons submit to us in your name.” He replied, “I saw Satan fall like lightning from heaven. I have given you authority to trample on snakes and scorpions and to overcome all the power of the enemy; nothing will harm you. However, do not rejoice that the spirits submit to you, but rejoice that your names are written in heaven.” Luke 10:16-20

So first Jesus sent out 12 disciples and then (Luke 10:1) he sent out 72 (or 70 according too some scriptures). He said that there is too few workers, so they should pray for God to call more workers. WE are these other workers! We are not the 12 or the 70, but we are the disciples of this time who should continue what Jesus taught those 12 and 70 to do: to heal the sick and to tell that the Kingdom of God has come near. Jesus’ first words of his ministry were “Repent, for the kingdom of heaven has come near.”(Matt. 3:17) and later in Great Commission he said that we have to baptize and disciple people. This is what we need to do! To heal people, to preach repentance, to baptize and to disciple.

When I went out to buy some stuff at the Prisma shopping mall I had to deal with the cold and windy weather of Finland. Brrrrr!! But I pressed on and I made it alive into the shopping mall.

Today I first met a guy with pain in his back, painlevel 7 out of 10. I thought that this will be very nice! Sadly, the pain just didn’t want to leave him: After four prayers it was 6/10 so I decided to just tell him that “I don’t know why it sometimes doens’t work, but if Jesus would be here you would have been healed! I still need to learn a lot!”. He smiled at me and we said goodbey. The fact that not everybody gets healed, doesn’t stop me! I’m doing what Jesus has asked (to pray for sick and preach the gospel), so my mission is succesful, when I obey that. Healing is in God’s hands, not in mine. Of course it is much nicer and more effective, when people get healed, but like I have said, the important thing is not to give up, but continue! God has promised to give fruit, so he will!

Then I met a Christian guy with whom I had a VERY good conversation and I could give him my contact info. He thanked me and said that I was like a light in this dark world. He might even contact me and ask me to take him out for healing the sick too! This is amazing! Our God is great! 😀 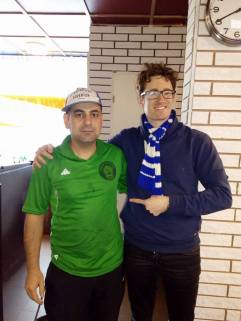 Later, on my way to KELA (I actually had to go there, but for a different reason I thought yesterday), I stopped to eat in a kebab pizzeria. The guy inside was looking at me with very open eyes, so I thought that I can eat there instead of eating at home more than an hour later. I went in and started to talk with the two workers there. I think they were father and son. I asked the son if he had any pain, but he didn’t have. When I asked the father (the son was interpreting), he did say that he had some pain in his back. I could pray for it and after the fourth prayer all pain was gone! Dear reader: Don’t give up after few prayers, if there’s still some pain (and the person lets you to continue)!! There is a secret in NOT GIVING UP! With some people the pain goes away already after the first prayer, but that is more an exception than a rule… and when it happens I often ask them: “Is it really totally gone??”, because I don’t want them to fake it, because I believe that the pain will go away!!

With joy I returned home, this is what I call sharing God in every day life.