I have decided to fast for 40 days, motivated by the testimonies of others. I want to write something about it, NOT to boast, but to encourage somebody to try it themselves. There’s a great secret (power) hidden in fasting.

I always thought that it was impossible for human beings except  Jesus (who is our example to be followed!) to fast for 40-days with just water, but then I heard a teaching from Torben  were he told about his own experience with 40-day fast.  So, it IS possible! I started to look on the internet and discovered that quite a lot of people already did it. Before, I have only fasted for a weekend and once for a week (it was easier than I thought). Around November I also talked with a lady from my church, who had also dreamed to do a 40-day fast (she started to fast today too, and another man will start on wednesday). Also, one christian woman from Croatia, who had read my blog, sent me an encouraging email: We shared somethings about our lives and I discovered that she had also done a forty day fast and had experienced a big strength in it. I asked her different questions and she encouraged me with it. She said: “The only thing that you will really need is a big motivation”. I am desperate to make disciples, that’s my motivation! Jesus has healed people through me (more during these three months than in my previous 31 years!) but “making disciples” is still another level. I believe I’m walking on a new road with Jesus and will learn more by doing (not just by reading books and listening to worship music)! But I also think, “wouldn’t it be nice to get a ‘superpower’ to complete the race, a bit like in some computer games?! Paul is viewing our life as a race. Who doesn’t want a super boost in the race he is running? In the end were not talking about some computer game but about eternity. I decided some time ago to try it and today was my first day so here is what happened:

One of my collegues and friends picked me up with his car. Together we drove to school. At the school everything went as usual: the only difference is that I don’t look so much forward to the coffee pauses like before cause I can’t take coffee. When others went for lunch, I stayed in the classroom and read my bible. Behind me in the class, there sits a Syrian couple (both around 50y) and the husband is limping. I already prayed quickly for him once, when we were walking outside. I asked him about his limping and he said that something was wrong with his back. I noticed that he didn’t understand much English, so after three short prayers, I decided to stop praying, because I didn’t receive a clear aswer, when I asked, how it was. In the end he didn’t feel a big change. I decided to later ask his wife (who could speak better English), if I could pray for him again. When I was reading my bible in the class at the lucnh hour, I was thinking, that if the couple comes I should ask the wife if I could pray for her husband. 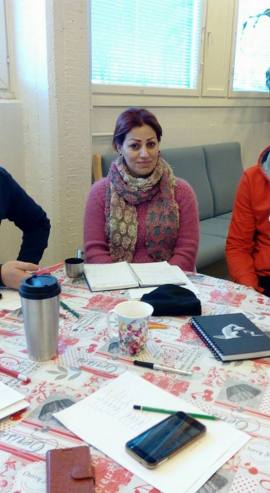 They did come to the class. I asked the wife and when she interpreted my question to the husband, he was happy to hear it and stood immediately up. I firstly asked if he had pain and where. He showed his back. I asked how much pain he had on a scale from 1-10. He said 5. Ok! I prayed the first time and asked again but nothing happend. After the second time he said, “maybe 4”. So I prayed a third time but again he said, “maybe four”. Now some other people, who had already come back from their lunch, started to laugh a bit, but I went on. I prayed a fourth or fifth time and now he started to speak to his wife in his mother tongue. I asked how it was and he said, “yeah, maybe 2”. The man was now mainly talking to his wife in his mother tongue. Now I commanded all last pain to go and everything left, as I heard from the wife when I asked her. The man also said to me: “No pain, no pain!”, when I asked him. Glory to God! Then the teacher came in the class and we had to start the lessons again so we all sat down.

After the break I asked the wife; “Isn’t it amazing, what happened?”. “Yes”, she said, “Really amazing!”. I told her that I could later tell more about Jesus, who had healed her husband, if she/he wanted that. She said: “yes!”. I suggested that maybe we could do it tomorrow during the lunchbreak, if they had some time and she agreed. Let’s see how it goes tomorrow: Oh Jesus, help me!

After school my wife and I slept a few hour nap and in the evening we had to put time to write the blog (I mostly write the posts and my wife edits it and adds things when needed) 😀 It takes more time than you would think!