The plan of the weekend was to travel to North of Finland for a wedding. The travel time was 8,5 hours so a lot of time for us to read, work a bit on the blog, send some e-mails and of course maybe even heal some people in Jesus name? 🙂 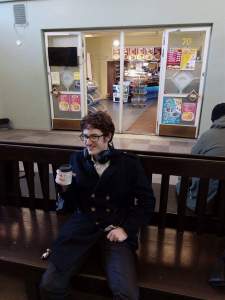 We left on Friday at 8.00 and took a bus to Hämeenlinna’s Railwaystation. While we were waiting for our train I was thinking: “Hmm, I would like to buy a coffee and ask the waitress if she has any pain”. I went to buy coffee (which was actually very bad) and asked the cashier if she had any kind of pain or sickness. She had pain in her arm, so I asked her if I could very shortly pray for it. She was ok with it, so I put my hand on her arm and commanded the pain to leave. “Thank you!”, she said and wanted to go on with her work, but I asked: “No no, try it first! Does it still hurt? Otherwise I’ll shortly pray again”. She checked it and after 2 seconds she said..  “What!?”. “Yes, that’s Jesus who healed you”, I answered. She looked at her arm with unbelief and I asked again if she had any pain. “No, there’s no pain any more”  She checked her arm again. I gave her a TLR-movie card and said that she should check the movie on the card. She said she would do it and then I wished her a good day and left, as she looked like wanting to go on with her work.

I was so happy! God is really faithfull!

When we took the train from Hämeenlinna to Tampere, the conducter came to ask for our tickets. I used the opportunity and asked him if he had any hurt (he looked like a very friendly guy who would maybe let me pray for him even if he was working). The conductor told that he has a bit pain in his shoulder, 1/10. I prayed for it very shortly, but he didn’t know if it was gone because he felt the pain mostly, when he was using the shoulder for something. I gave him a TLR-movie card and wished him a good day! “You’re an amazing man!”, I said to him, when he was turning away. “Thank you, you too!”, he replied

In the third train from Oulu to Tervola I still had an opportunity to pray for one woman who was healed from headche in the restaurant area and also I had a good conversation with two girls. At the same time, my wife had stayed on our places and was talking with a 50+ year old woman. When I had come back, she told my wife in Finnish (she didn’t know enough english), that she had had a plaster, which was taken away two weeks ago, and her leg was still hurting. My wife whispered it to me and I told her, that if she won’t pray, I will. Under this loving pressure, my wife asked the woman, if she could pray for her. “Are you some pentecostals!!”, was her very surprised and not so happy reaction. My wife explained, that she has a lutheran and I have a pentacostal backround, but that we are most importantly christians. The woman told, that she had left pentecostal church two years ago, because of people talking behind her back. My wife answered her with empathy and asked again, if she could pray. She didn’t mind, so my wife touched her leg under the table and commanded the pain to go. My wife asked, if there was a change, and she looked a bit puzzled. “It’s better”, she told and after another prayer even better. It seemed that she was happy and surprised with the result, so my wife didn’t want to press on. We continued to talk untill we had to leave the train and she even had a friend in Forssa who we know, so she happily sent greetings!

At the wedding I didn’t pray because no-one I asked had pain. All the people we talked with were Christians and we could share all kind of encouraging stories about the past months. Many were really excited about the things we were telling! 😀

On our way back to Forssa we had to take 2 trains and one bus. We had to wait 20 minutes for our second train, so I asked different people at the station if they had pain. Many said no, but then I found three guys who were going to the army. One of them had a “bruised” foot (or something) and couldn’t walk very good on it. His painlevel was 5/10, so I asked if I could pray for it and added that he would be very happy! “Of course”, he said. I prayed shortly and he thanked me, but I asked if he could check it. He tried it and I could see on his face that he was quite surprised. “Yes, maybe 4”, he said. I prayed again and he told that the pain was “maybe 2”. I prayed again I it was all gone! Great!! I gave all 3 of them a TLR-movie card and said they should really check the movie.

On the second train we had to stay for a “very long time”, 3-4 hours (long at least for a Belgian hearer). After being one hour in the train, there came a couple our age sitting rigth next to us. I was a bit looking at them, and my wife already knew, what was coming.  I asked them if they had any pain, but they didn’t. We ended up having a very nice conversation about all kind of things, and every now and then I could also add what God has done in my life or how he has lead us. After a long conversation, we gave them the TLR-move card and told that they should really check it and that it really changed our life 4 months ago. It was a really relaxed and enjoyable encounter, which started from me asking the question: “Sorry, can I ask you maybe a strange question: do you have any pain?”.

Great weekend! Thank you God for all the people we met! 😀