AMAZING! What a nice day it was! I’ll tell you shortly:

At 14h I had planned my second visit with the friend of Juuso, remember.? It hadn’t been what I had been thinking. Once I had seen a very strong delivery of a relative of mine and that had made my belief very strong. Think about it; if you have seen one of your relatives totally transform and hearing and seeing a demonic manifestation at the age of 12years it is very strong! Seeing that those demons, how frightening they even try to be, just have to listen to what is said to them “IN THE NAME OF JESUS”! It showed me at a very young age who the boss of this universe is! I said to myself that nobody could ever make me belief that God didn’t exist. I also believed that almost every demon would go away in the same way (with screaming and strange faces and gestures) when prayed for a demon possessed  person. Nothing of this I have experienced yet. Though I did experience it this way when I assisted in the casting out of demons of two persons in the kickstart in Latvia. In Finland I also went to a local kickstart in which I also helped with the casting out of the demons of one person (who’s now a disciple: ).  But to be honest, when I have been praying myself or with the help of others at my home; for a demonic possessed person I haven’t been able to deliver that peron. Strange it is. Anyway I see myself being succesfull in that area in just a matter of time cause God promised me so, see section “about“.

I went  to Jona (not real name) the friend of Juuso.  Again I spoke with him about what it meant to be a disciple of Christ. He has a fear to come outside. A fear that just came 15-years ago as I remember correctly. It is really bad because he had been in a psychiatry and is now on pension (at age of 55y). Last week I prayed for him and commanded every demon or evil spirit to go but nothing happened. When I visited him a week later (tuesday 16.05.17) I did the same but again nothing happened. I was thinking; maybe it is just a “renewing of the mind”, next week I hope to see cause I gave him some home work. He should see the two pioneerschool lessons about baptism, “repent and be baptised, lesson 7, and “being baptised for the remision of your sins, lesson 10“. I’ll ask him if he thinks he has to be baptised “again”/ or for the frist time “in a good way”. I should check with him together “baptism with the holy spirit, the new promise of the new covenant” and pray for the Holy Spirit to come on him if he has no spirit filled life yet, but I think I heard him already speak in tongues when we prayed togeter. After almost two hours I left.

The sun was amazingly shining; a real summer feeling! I went to a shop to search for people to pray for. Before I went in to the supermarket I asked some guys who were standing/”hanging” outside the shop, if they had pain. Nobody had, so I went in. Immediately I saw a group of girls who are usually laughing at me but as I saw them I didn’t care but went straight at them. Standing for them I asked first in Finnish if they had any pain. No, no pain they said in English. Some were starting to laugh, but one girl, and then another girl said something I couldn’t understand. It was not “no/”Ei” but some kind of Finnish sentenceS that I didn’t understood so I asked again but now in English, do you have pain? … One tall girl said, yes. All the others went quiet. I asked if I could pray for her and she said “yes” -without any laugh this time-! I prayed once and she said again something Finnish but I could understand that the pain was gone. Because the girl was still a bit checking and unbelieving I said that I would shortly pray again and again she spoke in Finnish and sounded very surprising way! It looked like she couldn’t believe what just happened. Just like in Ghent,  a lot others (girl) friends who were standing around her asked for prayer too. It seemed that now four girls had pain. I prayed for all of them and all pain left from the first prayer. They were shocked; and I was very happy!  😀 I told them “isn’t it amazing”? … I gave them my contact info but since they were starting to talk in Finnish with each other I went into the shop. I knew I would see them again. .

After I had done my grocery shopping I went outside and walked towards the place were they sold ice creams but no one who I approached had pain so I wanted to make a lang walk back home in the nice weather. Suddenly I passed a guy (around 20y) who was on his own sitting on a bench. I sat next to him and started to talk with him.

He had locked the door while the key was stil inside so he had  to wait on his parents to come home. No problem I’ll give you some company (I was thinking). I asked him my favorite question but he had no pain so I told him what I normally do when people have pain and so on… I tried to explain the gospel in a very short “cups & cookie” way but still knew that I have to practise this! After half an hour I asked if I could generally pray for him and he said yes. After the prayer he thanked me and said he would watch the movie(card) I gave him. Great! It was a very nice converstation.

I continued my way back home, I passed a couple of the Finnish course I succesfully had attended. They were both muslims and very happy to see me. I asked if they had pain and the woman said “yes”. I asked if I could pray for it and she said she was a muslim. I said “no problem, you know that Jesus can heal, do you”. “Yes, she said”. “We have the same Jesus she said”. It sounded like she ment that our faith was actually the same so I said, “No I think the difference is that Jesus is my God and with you Jesus is a prophet. But you know that Jesus can heal and that’s what I do, healing people in Jesus name”. The woman said she had some pain in her back so I asked if I could pray for it. She said “yes”. I knew this would be nice! First prayer, nothing changed… or yes, maybe a little bit. -I believe she said this just to comfort me-. I prayed a second time and still nothing changed. I couldn’t understand it. “Why God?” I asked if I could pray again and she said, “of course”. Than I suddenly saw the young guy I had talked to on the bench walking towards us. When he saw what I was doing he stopped just 10meters from us to watch.  I condemed the pain and thanked the Holy Spirit for healing! Again I asked how much pain she still could feel on a scale of 10: 1,2,3,4… …”No, no pain”. Whaat! No pain? “No, No pain!” Waaw, isn’t it amazing. She smiled and said yes.

Her husband looked really happy and was shining. I said good bye as I had to go and saw that that guy was still looking at me. Amazing stuff hé, I said to him. “yes” he said back. “Well on the movie you’ll see more of those miracles! Watch it”; “yes, I surely will”, he said. I also said to him that he shouldn’t forget to write to me an email when he wanted to meet me to talk more about it! He said “yes”. And we both went our ways.. 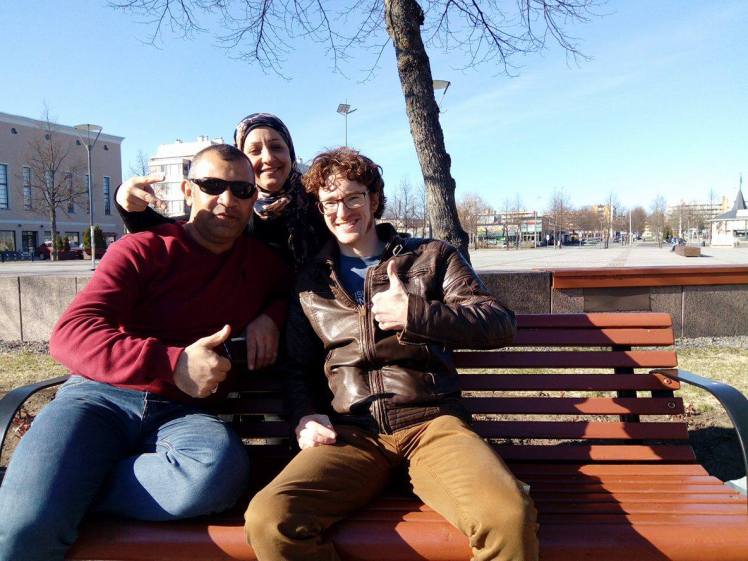