Ooh, how lovely it is to go together with fellow disciples on “the streets” to reach people. That was the aim why we all gathered in Tampere, middle Finland. 1 Guy from Helsinki, 1 girl and guy from Tampere (this guy already once came come to me when my wife and I baptised somebody). Now we all came to Tampere to go together on the street to pray for the sick and share the gospel. We had no plan just to be led by the spirit.

Being a “fisher of men” I threw my hook everywhere I saw an opportunity. I started with asking people all around me if they had pain and if I could pray for it. In my opinion I find it quite easy to tell people about God when you ask this question to people; if they have pain I ask them if I can pray for it and they get almost always healed and are surprised. If they have no pain it’s a perfect opportunity to share with them what I would have done if they would have some pain. I tell them that Jesus died on the cross and took all our and also their pain on him so we could be free from it. If they don’t believe they will tell you but then I tell them; yes, that’s why it would have been cool if you would have some kind of pain were I could pray for, then you could have felt it yourself that there is a God and you would have to “think again”. (Is there really “no” God???)  My friend said he knew a good place to eat as he knew the owner of the place. We went to that place and ordered our meal. I asked if the owner of the shop had some pain. The restaurant owner smiled and showed me a sticker on his table “PRAYER the best WIFI NETWORK” (something like that). He said he was a believer too. He also said, that he had no pain but asked if his staff had pain. One of them said he had. I prayed over it and all the pain left. Then the owner asked if I could also pray for a woman who was not a believer (yet) and worked with him (she had pain). At that moment Janica (my sister in Christ) came in to order her food and I asked Janica if she could pray for the woman. They would see that it is not me who’s the healer but it is Jesus Christ who heals. I think they knew that already but I like to share the “spoil”. As a fisher of men

the most (hard) work is to find people with pain who let you pray for it, not the prayer itself is hard work, no that’s the nicest part cause they mostly get healed and you can share in their happyness cause you prayed for it. The hardest part is to find them.

So Janica prayed for the woman of the shop and (off course) she got healed too; I could also pray for the workman of the shop who was waiting at the door next to this food place.  I asked him if he had pain and he said he actually had, when I prayed for it all the pain left after three prayers and he was surprised. I told him that Jesus just healed him but he was not so interested in that. Anyway he had a good contact with the owner of the food place were just two people from the staff were healed so the owner had something to talk about with him. During our lunchtime, Janica came to sit next to the woman who didn’t believed and just got healed. She spoke with her about the gospel (Good News) of Christ.

It was nice weather so we went outside: nice things happened, to much to tell it all but I’ll show some pictures and will give some explanation with some of them. You have to know that these are just some pictures of people who were ok with taking a picture with them. Sometimes it just doesn’t fit the occasion to take a picture, as this is not our aim. 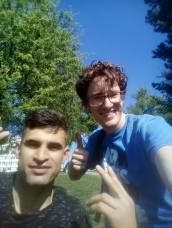 to a parc and I saw  lots of people relaxing there. I wanted to talk with all of them but obviously not everybody was interested in that. When I came towards some people with a darker skin one of them had pain and let me pray over it, he got healed. I could share with him that Jesus healed him and wanted to share much more, but he was there with a friend to relax and I didn’t want to bother him too long as he was already speaking with his friend. I have to learn to take more time to explain the gospel when someone just get healed but I’m learning. Jesus help me!

I went to another gang and there the guy with many tattoos got healed from some pain he had (do not know anymore what it precisely was). At the same time a girl who was sitting close to us was following all what I did and apparently she had also pain so she went close by to ask from me if I could pray for her too. When I finnished t 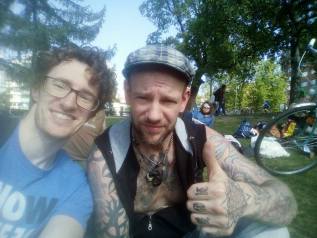 alking to the guy I saw the girl and asked her if she had pain but she said that she had pain but because she had come closer to me she was already healed. … Amazing!!! She was healed by her own faith! At least it is something I have never seen in my life that someone got healed just because they came closer to me believing that they would be healed by the prayer (eventually that wasn’t needed anymore because the Spirit healed them before I could ask it). Amazing!!!

We met a friend of a disciple who came together with us to the street who seemed to be already a follower of Jesus but when I asked him if he had been baptised as a baby or on his own faith he said that he was only baptised as a baby. I explained to him that it was really important to be fully immersed as it was also a sign that resembled the death of Christ. Your whole body had to go under the ground/water to die with Christ and to go up with Christ (out of the water) to receive a new spiritual life from Him. Afterwards you have to be filled with the Holy Spirit so you could do the same things Jesus commanded all his disciples to do… ie. making disciples! 😀 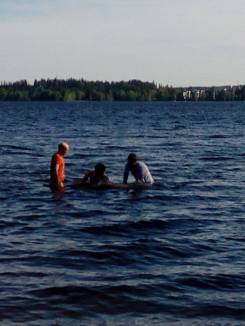