One big difference between South Africa (SA) and Europe is, that in SA you can say to a waiter “Do you or any of your collegues have pain?” and the waiter will ask their collegues and send them to you if they have pain. In SA faith in God is something normal and not embarressing. In Europe you can ask an individual waiter, but they won’t tell anybody else about your question.

Waaaw! What an ending of our South Africa experience; more than 15 people got healed, a lot gospel was shared and many  people, even though believers, were shocked. We always talk to people before or after the praying, but it’s impossible to remember afterwards exactly what we said. Sometimes it’s our own testimonies, sometimes it’s encouraging a fellow Christian with some bible verses to tell them, that they can do it too or sharing some testimonies and gospel basics to a non-believer. So even if we don’t always remember to write what we said, the healing never happens without explaining the gospel to the person.

On Friday my wife and I went again to another shopping mall. This one wasn’t closed but it was like a half moon shape around a parking lot, where there was many smaller shops and cafeterias. Again we started by going for a lunch. In SA there seems to always be many waiters and waitresses with nothing to do. While going in and asking for a menu, I asked the 3 waitresses around me, if they had any pain. One of them had and I could pray for her. After some prayers the pain was away (don’t remember anymore was the pain in her back or leg or knee). Inside we asked the waitress who took us to the table, but she didn’t have pain. Still, I asked her to tell all her colleagues, that I would be happy to pray for them in Jesus name. Surprisingly, after a moment there came a very sweet waitress who had some pain. Believe it or not, her name was Blessing! 😀 Her back pain went away after just some prayers! It’s amazing how God wants us to give a taste of his Kingdom to all people. 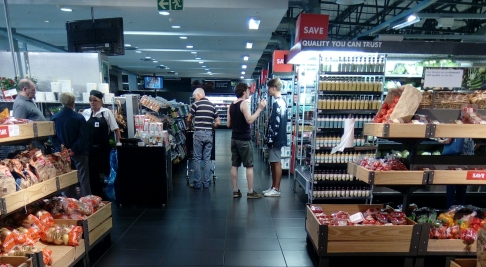 After eating we again visited a grocery store. First I talked to a blond white lad. He didn’t have pain, but he was a Christian and I could encourage him. He was very positive and interested in what I was telling him. A nice start!

After some walking around I found some nice coffee beans and was discussing with my wife, which ones and how many I should buy. I saw an Indian lady with her daughter and went to ask them if I could pray for them. I could pray for her pain and it went away after the first prayer. She was very happy and let us take a picture of herself, her daughter and I. After the pic she even told us that she was a Christian too! We were very surprised, since she looked like an Indian. 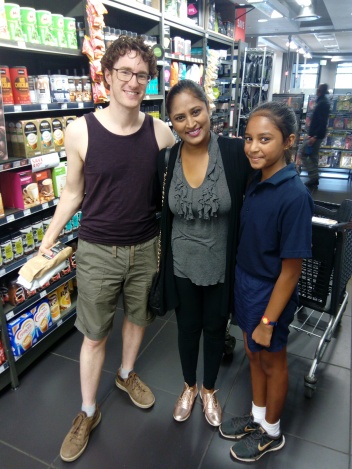 Since it was SA (even if I had been thrown out of a shop on Thurday) I tried my luck and asked some workers. One short black guy was very helpfull and started too walk around to go and ask all his collegues 😀 He went in to the ‘only for staff’ area and came back with a man in nice clothes, who looked like the manager of the place. He was happy to let me pray just there in the middle of the corridor next to milk products. His feet were hurting and after every prayer he tested them very thoroughly which looked like he was jumping and stepping on his spot. Another worker was also checking. When the pain had left from the managers feet. I prayed for the other worker’s back. He also checked it after every prayer and bended his back. So the result from the shop was, that I found coffee and many people to pray for, while my wife found some dried mango rolls, interesting spices and SA’s speciality, dry meat.

Next we went to visit a bookstore, because my wife was thinking about finding some nice fridge magnets with Bible verses or something. We arrived to the shop and were looking at the closest things while I saw a white middle-aged lady with crutches coming straight towards me to go out of the shop. Without any hesitation I asked her if she had any pain. To our surprise, she was very open and happy that we asked. She had been in few different accidents and after those her knees, hips, back etc. were hurting. Anni and I both prayed for her few times. She said it felt better, but it wasn’t totally painless. She was Christian herself and did’t feel weird even if we were standing in the middle of the way out (“again”, my wife would add :D). When she had to go, she turned a bit and added “I appreciate your boldness! We should all be like that!”. What a heart-warming ending and encouragement! We continued into the shop and also found many Christian books, that you would never find from a normal book store in Finland or Belgium: only from a special Christian bookstore.

After some looking around I asked the worker behind the counter. She had some pain and let me pray for her. It was healed and the worker was surprised, so I asked her to take a picture with me and called my wife who was close-by to come with her camera. Two other female workers had also some pain so my wife prayed for them. She firstly prayed for a lady with a headache. After maybe 3 prayers the headache was gone. Her collegue was pregnant and had backpain, so Anni could also pray for her, and the pain went away after some prayers. All the tree women were agreeing to take a pic! 😀

After buying some small things, we decided to go for a coffee. When going in, I again asked the personel if they had pain. They looked smiley, but a bit confused. One of the ladies, who looked like a cook, had some pain in her leg, so I took her hand over the counter and prayed. After the first prayer she checked it and said that it was a bit better. After the second prayer she tested it, looked to me a bit puzzled and asked: “What did you do with my leg??”. So the pain was away and she was a bit shocked about it (see the pic). After having our coffee on the terrace, we still went back in to ask, if she would be in a pic with me and she was happy to do so (we always tell, that we’re writing a blog and we want to encourage other Christians by telling the testimonies with pics or without).

Still while walking to a place where our friend would fetch us, I talked to two cleaner ladies and could pray for the others back which was healed.

I also asked two ladies who where about to enter the grocery store and I could quickly pray for one of them two, since her back was hurting. Some other people I asked as well, but they didn’t have pain. 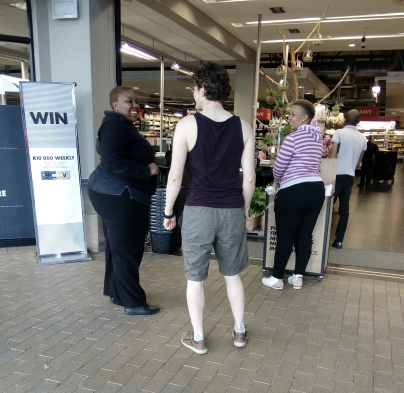 In the evening we left to the airport around 6 pm. I still used the time there to ask different people, like the guy at the baggage drop, security guards and airport personel. First I prayed for a security guard woman just when we had dropped off our luggage. 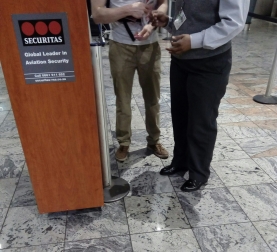 Then we went to eat to a place where we had drank some coffee on our arrival. Anni asked a waiter who tried to get us in to the restaurant, but he didn’t have any pain. After eating I still went to ask a father with his two daughters who looked very friendly and were sitting quite close. They didn’t have pain, but were friendly and encouraging.

When we found our gate, I asked 2 staff members, who were not busy and were standing close-by. A young woman had pain somewhere so I asked her to give her hand and I prayed for it few times. Their friend was looking at us some meters away. 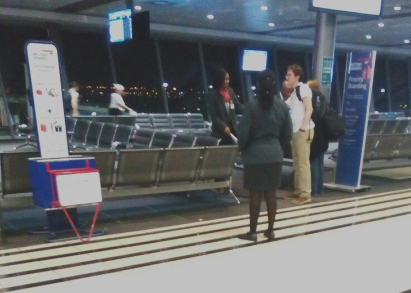 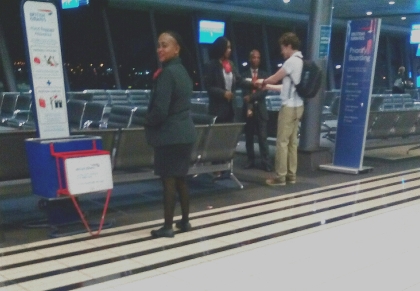 The young women was healed and assured that to her collegues too, so I could next pray for the lady who had been waching what I was doing. After some time I could still pray for the guys back. They were asking if I’m a pastor, but I told that I’m just a normal follower of Jesus. We talked a bit with them and my wife could take a pic from the ladies. 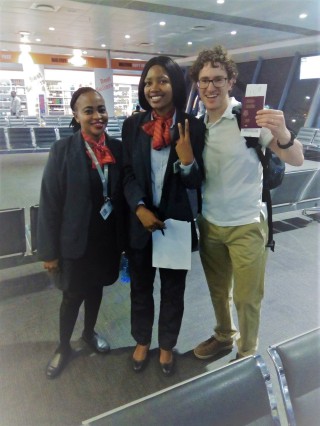 After the two planes and a bus I still asked some armyguys back in Finland while waiting for another bus that would take us to our home city Forssa. They were not very interested though and where saying that every religion thinks they have the truth. After some small chat, I left them, since they didn’t want any prayer. 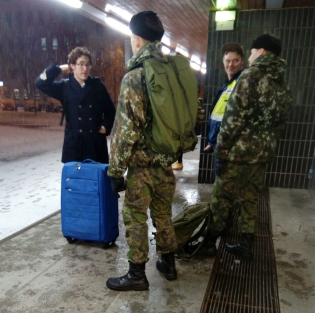 Thank you South Africa for all these nice experiences! Praying for people on the streets is easier there than in Europe in general. Still, even there sometimes you’ll get weird looks and rejections. My wife agreed that it was easier there than in Europe, still it’s not without the uncomfortable feeling that sometimes comes when you get rejected or people look weirdly at you. But it’s priceless to see the excitement and shock on people’s faces and to hear their stories! It’s amazing to talk with Christians who have been just living a churchlife and then they got encouraged and excited when they saw God’s power in practise. Thank you God for making us bolder step by step!